How It All Ends

"One day you're gonna be stronger than anyone else in the world. Every evil you can imagine is gonna rise up against mankind. And not for justice, for vengeance...you're gonna be the future."

Season 1, also known as Volume 1, of Netflix's superhero series Jupiter's Legacy was released on May 7, 2021.

It was announced on July 17, 2018 that Season 1 of Netflix's superhero science fiction fantasy series Jupiter's Legacy was picked up for a season order.[1]

Jupiter's Legacy follows the story of "the world's first generation of superheroes, who received their powers in the 1930s. In the present day, they're the revered elder guard, but their superpowered children struggle to live up to the legendary feats of their parents".

The first line Millar ever wrote on his notepad when brainstorming for the series was that "This has to be the greatest superhero story of all time" back in 2012. Eventually, when he started working on Jupiter's Legacy, he mentions how he and his wife just had their second baby and family stories were suddenly more interesting to him. It also made him realize that you don't see many stories about superheroes with kids. So he thought, “What would it be like if somebody as cool as Superman married somebody as amazing as Wonder Woman and they had kids?” and it was a fascinating dynamic for him. Not long after, he began writing scribbled scenes and Post-It notes for two full months, creating an entire universe of characters and how they all related to one another. Then in 2017, Millar and his wife Lucy sold Millarworld to Netflix. Their first priority was Jupiter’s Legacy, and while initially they thought it be better to adapt it onto a movieNetflix afforded them the chance to make this adaptation as big and deep as it needed to be, so all those scribbled notes and Post-Its went onto become fully realised in the series that wouldn’t need to be condensed into a three-act film.[5]


On July 17, 2018, it was announced that Netflix had given the production a series order for a first season. The series was created by Steven S. DeKnight, who is credited as an executive producer alongside Lorenzo di Bonaventura and Dan McDermott. On September 16, 2019, it was confirmed that DeKnight exited the series as showrunner over creative differences in the midst of the production for the first season.[6] On November 8, 2019, it was announced that Sang Kyu Kim has been named showrunner for the series.[7]

On February 11, 2019, it was announced that Josh Duhamel, Ben Daniels, Leslie Bibb, Elena Kampouris, Andrew Horton, Mike Wade and Matt Lanter would star in the series. On April 8, 2019, it was reported that Tenika Davis had been cast in a recurring role.

On July 2, 2019, Mark Millar announced via his Twitter account that production for the series began in Toronto, Ontario, Canada, directed by Steven S. DeKnight.[8][9] On January 23, 2020, Millar announced that they finished filming.[10] The series was filmed under the working title of “Zeus”. There were many videos capture by fans.[11] In April 2020, Mark Millar provided an update on production saying that the FX work was continuing to make good progress.[12] On January 27, 2021, Andrew Horton posted on Instagram that they were doing reshoots for the series.[13]

On February 3, 2021, it was announced on IGN website that Jupiter’s Legacy was in their lineup for the two-day digital event of IGN Fan Fest on February 26 and 27, 2021. The panel boasted the exclusive first interview with Mark Millar and Josh Duhamel about the series. In this exclusive conversation, the fans got new details from Millar and Duhamel on how the expansive graphic novels jumped from page to screen in Netflix’s new series. New character details, new plot details and an Easter egg from Frank Quitely, we’re delivering answers on this superhero saga that has been years in the making.[14][15] At the digital event they released three exclusive sketches from the show by original comics illustrator Frank Quietly.[16]

On May 1, 2021, Josh Duhamel was interviewed for Access. He talked about his sons input on his costume and teaming up with co-star Leslie Bibb for their second project in a row.[18] Josh Duhamel, Leslie Bibb, Matt Lanter, Ben Daniels, Elena Kampouris, Andrew Horton, Mike Wade, Tenika Davis, and Ian Quinlan were interviewed by Tara Hitchcock.[19]

The original superheroes in 1929 making their journey to the island that doesn't exist after the Wall St Crash where they lost everything, returning home with their super-powers.

Leslie Bibb as Lady Liberty, Josh Duhamel as The Utopian and Ben Daniels as Brainwave 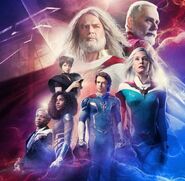 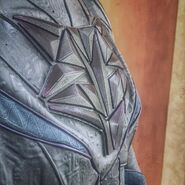 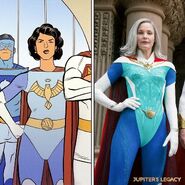 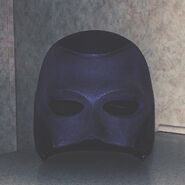 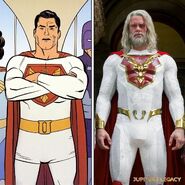 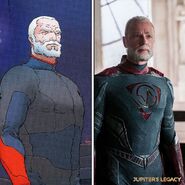 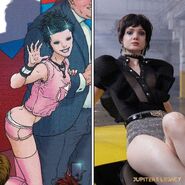 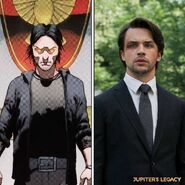 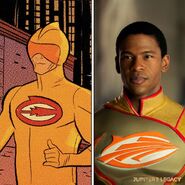 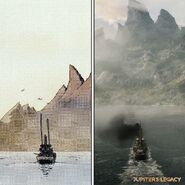 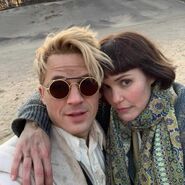 What happens to Skyfox and Brainwave in JUPITER’S LEGACY?

Community content is available under CC-BY-SA unless otherwise noted.
Advertisement